Descended from rabbis and cantors in his grandparents' generation, Cantor Mike grew up in a learned and musical conservadox family. Religious life centered around the weekly Sabbath - Shabbat, a day of prayer and meditation,

food, rest, and leisure.  Friday evenings, we lit candles, made "Kiddush" and "HaMotzi" to welcome the Sabbath, and enjoyed a kosher chicken with roasted potatoes, tzimmes,  lokshen kugel, and the occasional chulent delight when

staying over for Shabbos in Seagate, Brooklyn, steps from the ocean, with my Nanny Dora and Poppy David.  After

dinner, our home was filled with zemirot (songs) or "zemiros" as we called our spirited chanting of Birkat HaMazon

(Grace after Meals) and Jewish song  (hear Cantor Mike at 14 reluctantly sing a new melody with Poppy David and family) .

But first, a gleisel of tei! (glass of tea) with Nanny Dora's famous apple cake and mandel broit, and a little fruit compote

on the side.  Nanny herself was partial to a Swiss fudge Stella Doro cookie and a "shtickel" chocolate (a piece of).

After shul and a Shabbos afternoon nap, weather permitting, we would go sailing or play tennis as a family.

Those were the days!

who was known as the Herring King of Eastern Europe (pickled that is!) until he washed his hands of the herring business,  leaving Poland to trade in diamonds, in Antwerp, Belgium, in the 1920's. When her husband passed in 1953, Rachel remained true, and lived her life alone in Dublin, until her passing, 27 years later. Nanny recalls having more than one offer to remarry, but stayed faithful to Wolf's memory, as she once intimated, "Michael, I remained faithful because your grandfather was the love of my life. He would take my hand and say to me, "Rachel, you are my rose!" (Rachel, in her Yiddishe/Irish brogue remembers how she met and fell in love with Wolf, recorded the week of my Bar Mitzvah! My Poppy didn't make such a good "first impression". 'It was during the first World War, Pinya brought a soldier friend to the house'..)

As a child, my fondest memories of Nanny Ray were during her occasional visits from Dublin. Every morning we dipped our hands in a pot of melted hot wax, over and over, making wax finger casts, to soothe Nanny's rheumatism and arthritis, exacerbated by the cold, damp sea air of Ireland. And playing piano for her was grand - show tunes and Yiddish folk

songs - while she sang... her favorite classic? "Young at Heart".

singing prodigy and held the position of chief choirboy soprano soloist for legendary cantor, Gershon Sirota, in the

Great Synagogue of Warsaw, on Tlomackie Square. (For those who know, the esteemed Cantor Moshe Koussevitzsky,

a mere boy himself, stood next to Wolf, in Leo Lowe's famous choir). After serving as an officer in the Polish army during WWI, Wolf married Rachel in 1921, then traveled Europe, appointed to various cantorial positions in Belgium, London, Manchester, and finally Dublin, where he held the post of Chief Cantor with revered Rabbi Isaac Herzog z'l, at the Orthodox"Greenville Hall" shul.  Our family settled in Ireland in 1930. Each of my father's siblings were born in a different country - a United Nations unto themselves - my father, Theo, born in Manchester, England. Why not settle in England, a modern, cultured society with a thriving Jewish community? Well, my grandparents felt the rise of anti-semitism in Europe, saw the emergence of Hitler (y'mach sh'mo) and Nazism, and remembered that Ireland had remained neutral in WWI. Eire was a safe haven to raise a family and live a Jewish life freely. After WWII, my grandparents traveled to Warsaw, Poland, and to Antwerp, Belgium, to see what had become of our family and sizable "yerasha" (inheritance). All was lost, and nearly all had perished in the Holocaust - 200 relatives, an unfathomable number!

My Poppy Wolf longed to bring his family to America after the war, but the United States government refused to

grant him a permanent visa. They considered us "Polish" not Irish, and with so many Eastern European refugees

leaving Europe, they granted him only a six month's stay.  Wolf made the most of it, visiting with family and auditioning

for a cantorial position in Boston at the prestigious conservative synagogue, Temple Mishkan Tefila, affectionately

known as Leonard Bernstein's shul. Their beloved cantor, Isidore Glickstein, had recently passed, and over 50 cantors from around the world came to Boston in 1947 to audition for the post. I can proudly say that my Poppy was chosen as cantor. He officiated High Holyday services there that year and stayed on until his visa expired in March

of 1948. The congregation did everything in their power to help grant a permanent visa to Wolf and family, but it was

to no avail. My grandfather returned home to Dublin, and lived the remaining few years of his life, heart-broken,

his dream of emigrating to America, unfulfilled.

While in Boston, my Poppy sang cantorial, Yiddish, and Jewish folk music on Fisher's  Yiddish radio station, weekly. However the only surviving recording of Cantor Rev. Wolf Garb's voice comes from a Friday evening service at

Temple Mishkan Tefila, when his microphone on the bimah was secretly wired to a rudimentary recording device.

Upon his return to Dublin, the congregation presented him with this vinyl record as a parting gift.

Hear a sampling of this rare live recording:

Kiddush (Blessing over Wine),    Adon Olam "Master of the Universe"     VeTaheir Libeinu "Turn our Hearts unto You"

The first cantorial recordings ever were made by Gershon Sirota in 1902. Six years later, my grandfather, Wolf, was chosen

My great uncle David Garb was a celebrated rabbi/cantor in South Africa and England before and after WWII.

​In my eyes, my Nanny Dora was living, breathing history. If you asked her who she was as a person, she would say this:

"I was a business girl. Customers would come into our furniture store,  Reliable Upholsterers, on Church Avenue in Brooklyn, and ask 'Where's Dora? I only do business with Dora'... When I was a girl of 13, 14 years, I was a smuggler,

that's right, a smuggler! I used to smuggle necessary food items into Poland during the war (WWI)... I was a lively girl with beautiful blue eyes. Once, a German soldier on the train was staring at me. I thought he was suspicious. I was so nervous, I didn't know what to think. Then he said in German, 'Froilein, your eyes are killing me!'... And the cousins in Warsaw, they couldn't wait till Dora came to town. There was Pinya, Velvel, and David. Pinya and Velvel were students, but your grandfather, he was the only one who made a living. I didn't marry for love. He was a shy boychik (boy) and I took "rachmonos" (pity) on him."

The year before Nanny Dora passed, at 96, we had these conversations, on her terrace overlooking the ocean,

How Nanny Dora knew that Poppy David was her "bashert"

Nanny Dora shares more insight into her choice of a husband

Nanny Dora, a girl of 9, keeps her sister Leah's secret

(What is a Lamed Vavnik?)

Who was my Poppy David? Well, for one, a master upholsterer and furniture maker. He apprenticed in Warsaw, and brought his skills to America in 1928, opening "Reliable Upholsterers" on Church Avenue, in Brooklyn, NY. So precise were his measurements, he could measure fabric for a chair or a couch and have no remnant left over. He had great fingers, and when he made a piece of furniture, you know it was quality and going to last. Visit my mom and sit in her living room chairs, crafted by her father, 65 years ago - not a squeak, not a tear, nor a fade - beautiful and like new, even today!

Lessons I learned from my Poppy David? He would say to me in his thick Polish/Yiddish accent, "Dere's no subshtitute for exshperience. I read about it in the New York Times." On education, "You learn your whole life, you die a fool." On saving, "A Jew has vhat he tears avay - take it from the top and put it in the bank." On his choice of ice-cream flavors? Vanilla is the best, "Vhat you need chocolate for? Vanilla is pure! Dere's no additives." On the subject of earning a living, since my early childhood, I remember my Nanny and Poppy visiting my family in Seaford on Sundays, and Poppy sitting down with me in our living room and saying, "So Michael, vhat do you vant to be vhen you grow up? A doctor? A lawyer? An accountant maybe? I vent to the doctor the other day. He took a look, here, there - a hundred dollars!" Then leaning in closer, as if no one should hear, "Michael, if you're a doctor, you'll earn a thousand dollars a day!" Such encouragement, planting of seeds... but we were a family of business people, teachers, rabbis and cantors!

Poppy David, 83 years young, chants Blessing for Rosh Chodesh"Blessing of the New Month". Nanny Dora wants more, but Poppy says he can't go on, his throat is dry, and then he asks a "funny" question about breathing and a humorous response ensues - listen and enjoy classic Poppy David and classic Theo Garb (daddy) humor!

Poppy David, at 75, introduces  with Nanny Dora, then sings a Yiddish love song followed by a Polish love song. 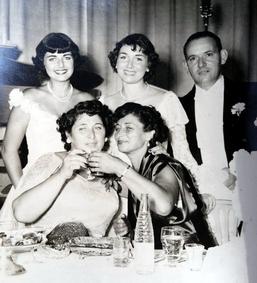 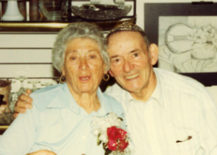 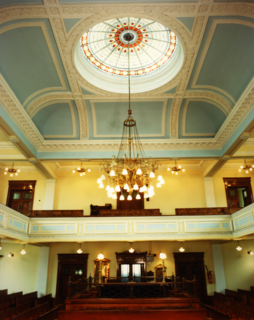 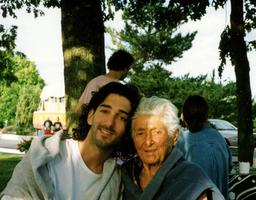 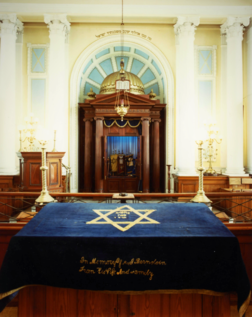 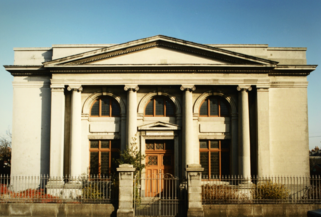 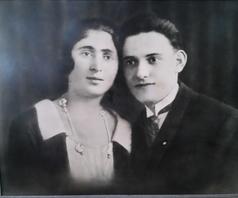